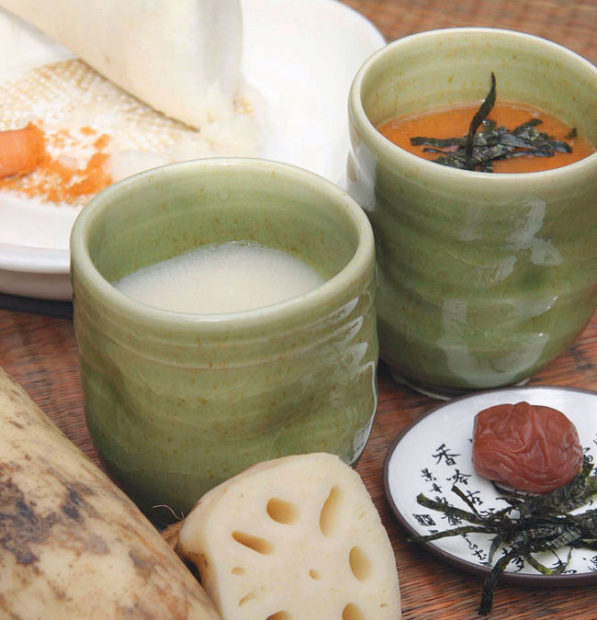 The weather is getting cooler, and our official calendar date of autumn is here.
It is time for us to take care of our lungs and large intestine.

When the weather changes from hot to warm to cool, before it gets really cold, our body adjusts our lungs to breathing in cooler air.
Our whole body feels the cooler air and tightens up the lungs.
So, if you were eating excess protein, fat, and oil (both animal or plant-based foods),
and they are all squeezed out, guess what—our body is trying to detox, and mucus is coming out.

You might have a runny nose or sneezing to detoxify nasal mucus, as well as coughing or a sore throat to detoxify phlegm.
Does that sound familiar?

These recipes are very good when you’ve eaten too much oily and mucus-producing food.

Lotus Root tea is especially good to drink when the weather is starting to cool down and you have a sore throat and are starting to cough. Also, it is a good remedy drink for Pneumonia, Asthma, Bronchitis and even Lung cancer.

I made it just this morning for Eric and Oro, who have started coughing.
I think they feel much better.
They love this remedy drink because fresh lotus root is very creamy and naturally sweet when grated with a ceramic grater.

Carrot and Daikon Remedy helps detox your body, especially the intestine, from excessive consumption of animal- or plant-based protein, fat, oil, and salt.

To make the drink:

1. In a small saucepan over a medium-high flame, combine the grated daikon, carrots and purified water, and bring to a boil.

2. Addchoppedumeboshiandafewdropsofsoy sauce (if desired), reduce heat to low and simmer for 2 to 3 minutes.

Recipes are from Love, Sanae cookbook.

I have been practicing macrobiotics for more than 25 years, and remedy drinks are simply kind to our body and soul, yet very effective for cleansing.
So, I make them almost every morning instead of coffee.

Drink these remedy drinks at least 30 minutes before breakfast, or in the late afternoon between meals.
Most conditions take at least two to three days of continued drinking.
If you have a serious health condition, it’s always wise to consult with an experienced macrobiotics counselor.

You can contact me here or check counseling service for counseling. 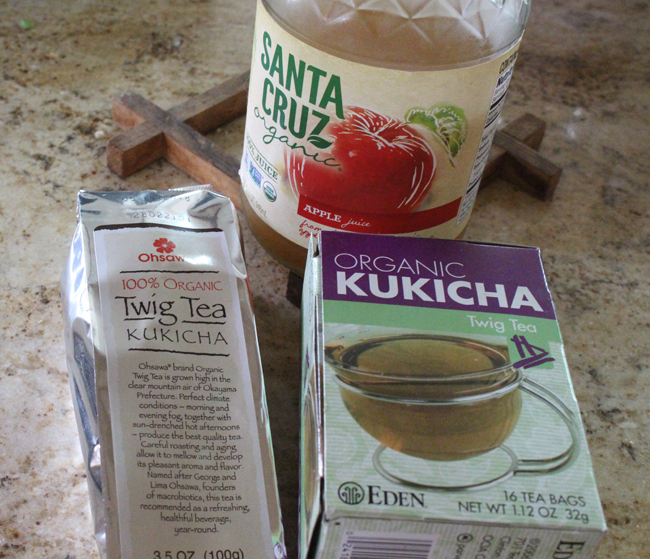 I love tea.
Yes, I am Japanese.
I’ve also been told that I was English in a previous life so that naturally gives me the title of “Tea Lover.”

Since I was about 7 years old, one of my favorite things was taking a tea break with my mother’s housekeeper, Mrs. Kato. We usually had bancha (harvested from the same tree as sencha grade, but it is plucked later than sencha, giving it a lower market grade). It is considered to be the lowest grade of green tea. There are 22 grades of bancha. Its flavor is unique; it has a stronger organic straw smell than sencha (a type of Japanese ryokucha/green tea prepared by infusing the processed whole tea leaves in hot water). Mrs. Kato said sencha was too strong for a child, and usually, it is for guests. I tried some, but I did not like it because it tasted bitter.

I started to learn Japanese tea ceremony when I was 17 years old. I used macha, a finely ground powder of specially grown and processed green tea. It was very creamy, and its aromatic taste matched the Japanese tea ceremony sweets. Macha is for special times, but it is high in caffeine. I am not able to drink it most of the time since I am sensitive to caffeine now, so my favorite tea became non-caffeinated herbal tea, like rosehip tea and bancha twig tea (kukicha).

Kukicha is very low in caffeine. Most of the caffeine is in the leaves, which are not used, and the rest is reduced by the aging process. Kukicha is called “three-year bancha” in Japan, because after the stems, stalks and twigs of the tea are picked, they are dried in the sun and aged for three years before roasting. I usually do not feel any caffeine effects, and it is safe for children to drink.

Kukicha has a unique flavor and aroma among teas, due to its aging process and becoming more alkaline. And the benefits of kukicha are numerous. It is an important part of the macrobiotic diet and is thought to lead to stable health and longevity.

It also good to add apple juice when you want to have a little sweet taste when your body gets too tight and need to relax. I usually add a half purified water and a half apple juice and heat up. You can add a slice of apple too. 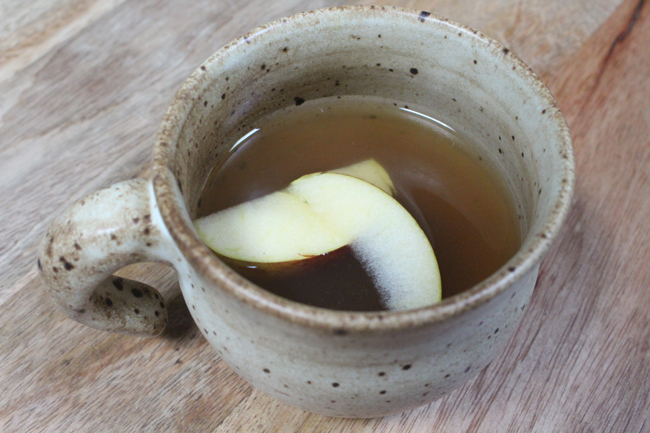 I use Eden’s Tea Bag for when I am traveling or going out for lunch/dinner. It still give a good taste of Kukicha.

Most of the benefits of kukicha tea stem from its alkalizing properties. Prevention of numerous diseases is achieved through alkalization of bodily fluids and tissues and consequent balanced levels of acidity. A diet containing white flour, sugars, dairy products, eggs and meat raises the body’s acidity and eventually results in fatigue, premature aging, weakened immune system, heart, kidney or bladder conditions, and problems with weight, joints and bones. A body containing too much acid draws minerals from bones and other organs and stores fat.
Twig tea (kukicha) is abundant with minerals like copper, selenium, manganese, calcium, zinc and fluoride, as well as A, C and B-complex vitamins and flavonoids. Like green tea, it contains polyphenolic catechins, which are famous for their anti-cancer action. The most powerful of these substances is epigallocatechin, which prevents cancer by discouraging the growth of tumors and stopping it from spreading within cells. Kukicha is also known to promote digestion. Moreover, it has a high content of tannin, which helps clean the body from toxins. Tannin can even free the body from nicotine and radioactivity, which is why it is recommended for people who take many medications.

Similarly to green tea, kukicha regulates the levels of blood sugar, and by lowering high blood pressure, it prevents strokes and heart disease. Being an immunity booster, it helps combat virus-induced colds and flu. Kukicha can also promote weight loss, slow down the aging process, and prevent ulcers. When brewing twig tea, it is important to use hot water, but not boiling. Once boiled water has cooled, the tea is steeped for three minutes at the most. It can also be served cold, with the addition of apple juice, and enjoyed throughout the day—even by children.

Many health benefits may be gained from drinking kukicha, including:

How to Make Twig Tea (Kukicha)

Place the water in a teakettle, and bring to a boil. Place the twigs directly in the pot or in a tea ball. Reduce the flame to low, and simmer 3–5 minutes. If adding the tea directly to the pot, strain through a tea strainer when serving. 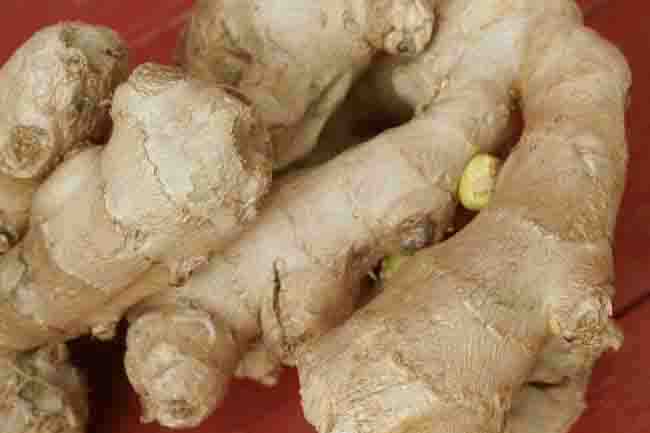 The kidneys are more active in the winter season and they do not like cold weather, so this is a good time to take care of them.

Your kidneys’ health is connected to: 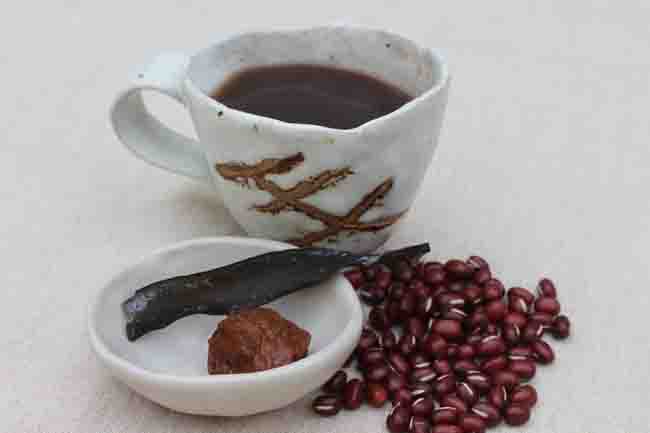 In this class, you will learn:

What you need for Ginger Compress

This warkshop is a hands-on class so you make your own Ginger Compress and apply it over your kidneys or/and other areas that you want.

Only 5 people can be taken this workshop!

If you want to attend the class, please email me sanaehealing@gmail.com 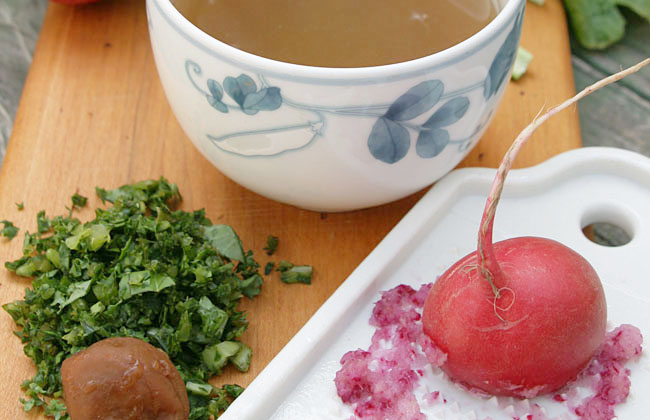 Spring is a time when everything is growing, but at the same time sinus and skin allergies are starting to exasperate us.

In Macrobiotic practice, these symptoms come when you have had too much protein and animal fat. This remedy helps to detox excessive protein, animal fat and also release cholesterol. It also helps the function of the liver and gall bladder gently.

1. Add minced greens in a small stainless pot over medium flame and bring to almost boil.
2. Bring the flame to low and simmer for 3~5 minutes.
3. Strain the greens* and put back the remedy to the pot on low flame and add red radish.
4. At the end add umeboshi plum and transfer to a cup.

• Use this greens left over from straining for soups or to sautée with other vegetables.

Do not boil. Have this remedy before breakfast for 7 to 10 days, take 3 days off, and then repeat for three months.