After a CT scan, biopsy, and one more test to do—a PET/CT scan—I was going to decide what kind of treatment to do for the cancer I was diagnosed Diffuse Large B-Cell Lymphoma (DLBCL) Primary non-Hodgkin of Liver, stage IV (cause was Hepatitis C that I got from the blood transfusion result of the car accident in 2001). 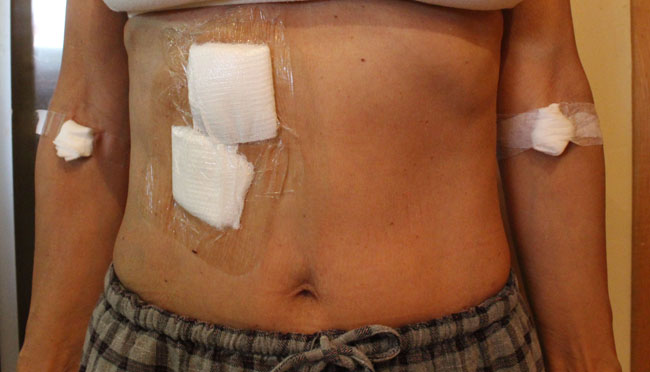 Biopsy: Two areas of the liver

I was already so weak from the CT scan test and biopsy procedure (I had so much pain after biopcy). I was not able to take the PET/CT scan test as I’d planned, but finally I got strong enough to go on April 27. I am very sensitive to chemicals, synthetic medicines, household products and skin products, so it is a challenge for me to take any test at hospitals or clinics.

Everytime I had to take CT or PET scan I had to drink a liquid that contains either barium or a substance called Gastrografin (diatrizoate meglumine and diatrizoate sodium liquid). Barium and Gastrografin are both chemicals that help doctors get better images of my stomach and bowels. Barium has a chalky taste and texture. They had natural flavor one, but it was artificial flavor of course and I had to drink two bottle of 450ml. I felt vomiting, but nothing comes up since I had to fasting for 20 hours. 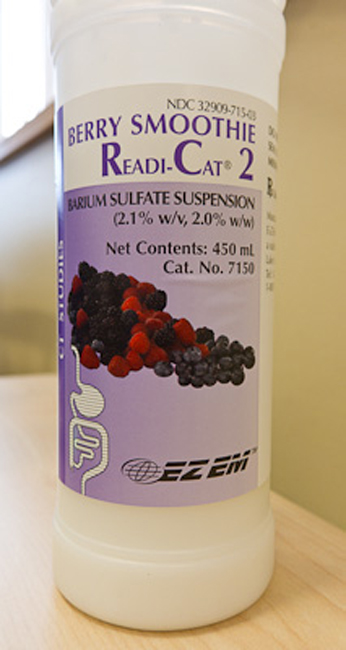 Photo: One of the two barium sulfate containers I need to drink before my CT/PET scan

When a nurse put iodine into my vein, I felt a sensation of pain all over my body. I felt that I needed a human touch, so I had to ask him to hold my hand. He looked at me first like, What are you asking me? That is not in my job description. But he held on to a few of my fingers. I wish he’d held my whole hand, but it worked, and I felt much better in a minute or so. I let his fingers go and said, “Thank you!” He did not say anything and walked away. It is a simple human act to me, but it may be the first time a patient has asked him to hold a hand.

After the PET/CT scan procedure was done, I asked the technician when I would get the results. He said not too long—that my doctor’s office would contact me when it came out, so I should wait. I wanted to make sure, so I repeated, “I do not need to call? They will call me?” He said yes.

Most of the test results took a few days to one week, so I was waiting. On May 10, I realized it had already been two weeks, but I had not heard from my doctor’s office. I called the hospital and found out the shocking news. The results were out on May 1 (10 days prior), but the doctor would not release them unless I made an appointment to come see him. I told them I was not instructed do so and was waiting, waiting and waiting. They also said he would be out on vacation, so I would not be able to see him till June 6. What? What did I hear now? I just could not believe what I was hearing. I needed to know the result now, so I would know what is going on.

They said someone would contact me to take care of the matter. I got a phone call from my oncologist’s assistant, who said the doctor could see me on May 30 instead of June 6. She would send the test result by post mail, since the record would not be online for another week. I could not believe it, but I was so exhausted with all this nonsense that I had no strength to argue.

I was trying to think that maybe the result was better, and that is why he did not contact me. As I wrote in the last blog, I did not think this doctor was a match for me. But I’d found only one doctor who’s had experience with this type of cancer; he is in Boston, and it was not easy for me to make a telephone appointment with him. So, I was sticking with the first doctor I had.

I received the PET/CT scan result by post mail, and it showed that cancer was taking almost all the liver.

I was getting weaker, day by day, and after May 10, I had so much pain throughout my liver. Every morning when I woke up, I looked at the sky and said, “Maybe I will not make it today.” But I said, “Sanae, not today! Today is for you to live!” 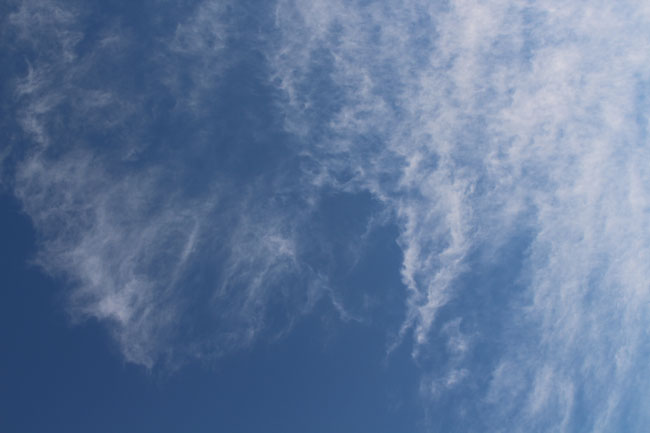 I love sky and clouds

Every morning when I woke up, I looked at the sky and said, “Maybe I will not make it today.” But I said, “Sanae, not today! Today is for you to live!”

When I had a near-fatal car crash in 2001, I felt like I might die. It is not a feeling you can explain, but you just know inside—feelings of fading away and not being able to grasp the moment of spirit here with my body on this earth. I was not really scared at that time, but I felt that I needed to choose what I want to do.

I felt that this was happening again—that I might not make it, and I have to do something.

I managed to celebrate Eric’s 50th birthday on the 15th. We had a quiet but great time by the ocean, our favorite place. (I had planned a big party for him at the end of the month, but it never happened, since I ended up being in the hospital.) 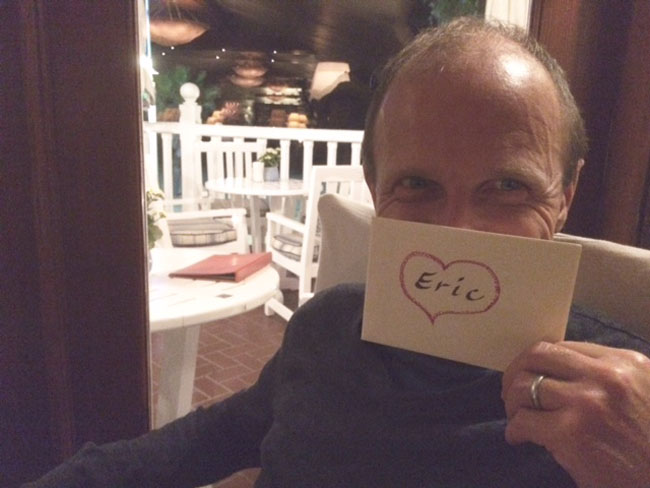 Eric’s 50th birthday by the beach

But when the next day came, I really felt that my life was coming to an end unless I find a new doctor/oncologist and act now!!!

I contacted good friends who could act right away and help me find a new doctor/oncologist. Two days later, the appointment for a new doctor came out of nowhere on May 19, at 1pm because the doctor had a cancellation. I was so weak, but Eric and two of my friends coordinate to take me with a wheelchair to a new oncologist’s office at 3:30 pm.

The oncologist explained the test result of PET/CT Scan very carefully, but directly and clearly. I felt she was a very compassionate person. When she found out I live a vegan, plant-based, macrobiotic lifestyle (no refined sugar) have not taken any medications for many years, have had no alcohol for 32 years, and do not smoke or consume coffee/caffeine, she said it means I am taking care of myself and am healthy, which is a good thing.

She gave me a choice of treatments. Since the cancer is so big and taking over almost all the liver, she suggested I do an aggressive, 24 hours a day five-day chemotherapy ＊EPOCH + Rituximab in the hospital right away.

It is 24 hours a day and a long five-day treatment, but it is not big doze at one time/one day like R-Chop (cyclophosphamide, doxorubicin, vincristine, and prednisone, plus the monoclonal antibody rituximab – this was recommended by the first oncologist) so you receive treatment slowly and can monitor while you are receiving chemo to adjust the medications.

Eric asked what would happen if I did not do the treatment. Without hesitation, the oncologist said, “Sanae will die.”

Eric asked right a way, “How long does she have?”

I could hear Eric’s voice….“Not even one month?”

The oncologist confirmed: “Yes, less than one month.”

I could not see Eric’s face, but I could hear he was crying.

When I hear or see really scary things, I freeze and am not able to feel. I was not scared to hear I will die, but it is scary to see my love crying because I am dying. I never meant to harm him.

I was ready to take the treatment already, after wondering each morning whether or not I would make it. So, there was no question; I went to the hospital right away. The oncologist took care of everything, and I was admitted to UCLA Santa Monica Hospital by 5:30 pm.

It happened so fast, but I was feeling all right. Everything was good, even though I was not able to go back home to let my animal family know that I was going to be away for a while. I contacted them telepathically, and they all want me to get better.

Thank you for your prayers and continuous support.

We are grateful and invite you to help us at this time by YouCaring Fundraisng to Support Sanae’s Recovery from Cancer or purchasing our books directly from us to cover my medical expenses.

Here are our books: 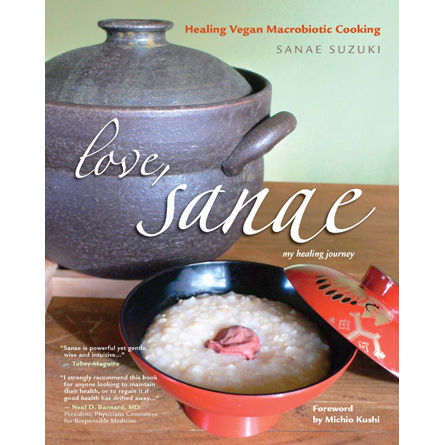 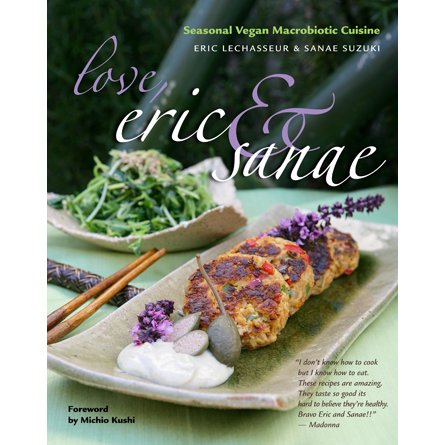 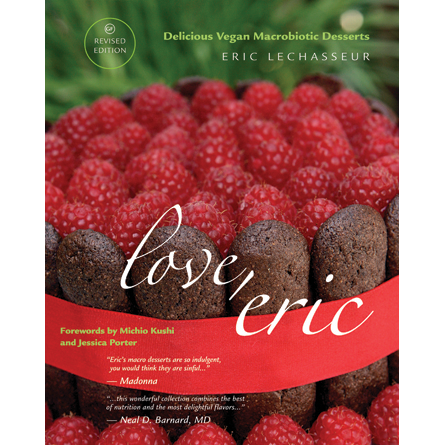 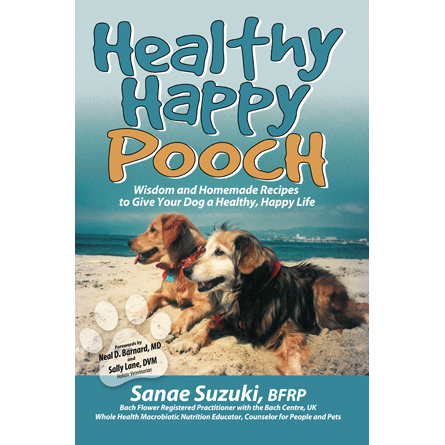 I will not be able to personally reply to each person, but I promise I will read everyone’s messages, emails, and cards.

To be continued: My First Chemotherapy