My month of September was swept away by Covid.

(I wrote about it on my blog, How I Care for Myself When I Got Sick with “Covid”)

I had a fever for two weeks and could not eat much, but I was craving the comfort food I ate as a child and I had dreams about these foods!

Pancake: my father made it with instant pancake mix only once or twice a year.

Donkey’s Steam bread: When I was a child, it was a popular “donkey bakery” ( a popular bakery that came to town on a donkey-drawn cart and sold various bread).

Orange marmalade: I was not too fond of jam, but I loved orange marmalade with sweet orange skin. Marmalade also sounds something special to me instead of just jam and the golden orange color of the sunshine.

Eric made a flaxseed pancake and a blackberry steamed cake to satisfy the first two. But my craving for orange marmalade still existed, and I thought of it every day.

A few days later, Eric told me the orange tree in my garden had fruits, so maybe we could make it. 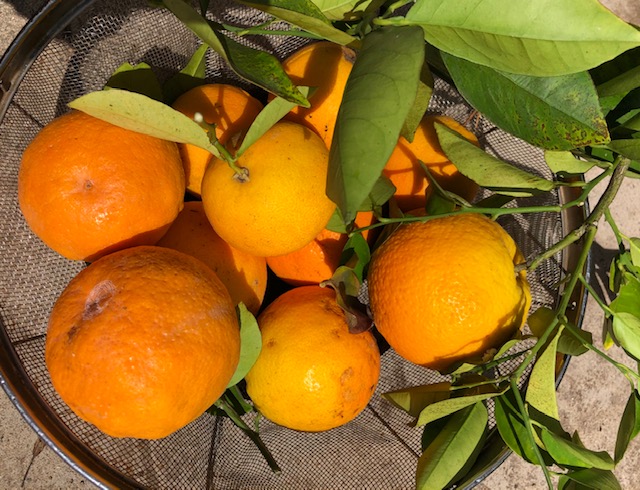 I tried to make it a few years ago, but it was not like what I remember. My memory of Orange marmalade was beautiful orange transparent color, and when I tasted it, my mouth got wrapped in orange flavor, and the skin was soft but tasted crispy.

The one I made was a little bitter because I did not separate the white pith, the orange flavor was not fully there, and the skin was not crispy.

I had to think about the recipe differently this time.

Eric has made jam many times, and when I told him how I made my orange marmalade, he said it sounded like making jam, so it was not marmalade. We talked together and made a new recipe.

The new recipe I wanted to try again was more labor and time, so I asked Eric to help me make it.

How did it come out?

Well, Eric is a skillful chef, so his advice helped as we made it, and it came out perfectly! 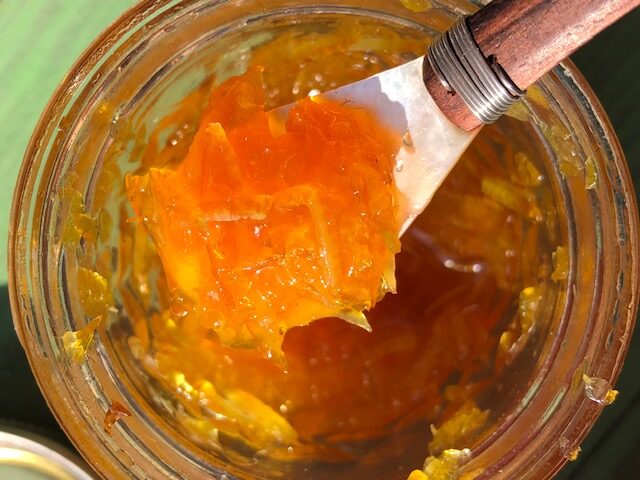 What did I change?

The main change was to separate the white pith of skin and cook membranes and seed as pectin in cheese clothes.

Here is the recipe if you want to try it.

2. Wash and dry the oranges. Using a sharp paring knife, remove only the brightly colored zest from the oranges. Please do not remove any white pith directly underneath as much as you can because it is very bitter. 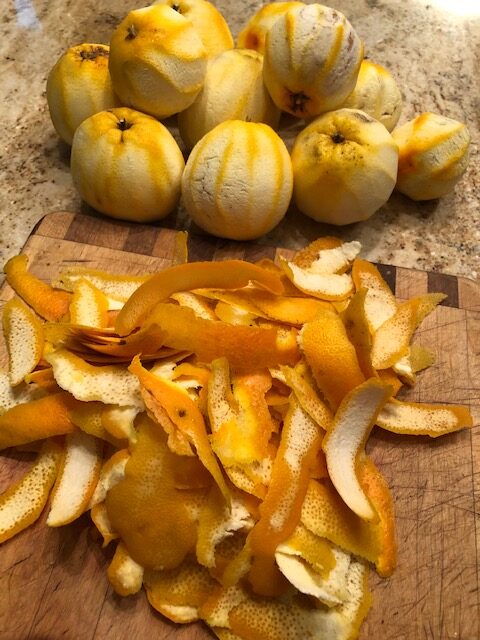 3. Thin match sticks the zest. Set the zest aside. 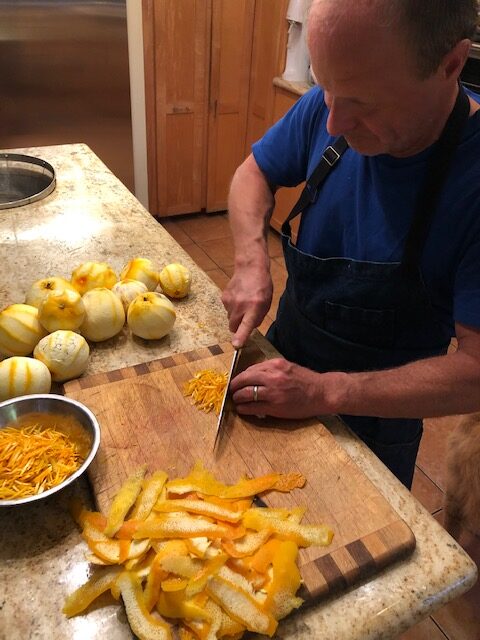 4. Cut the ends off the zested oranges, and then, working with one orange at a time, cut off the thick white pith from around each orange. Discard the ends and white pith. 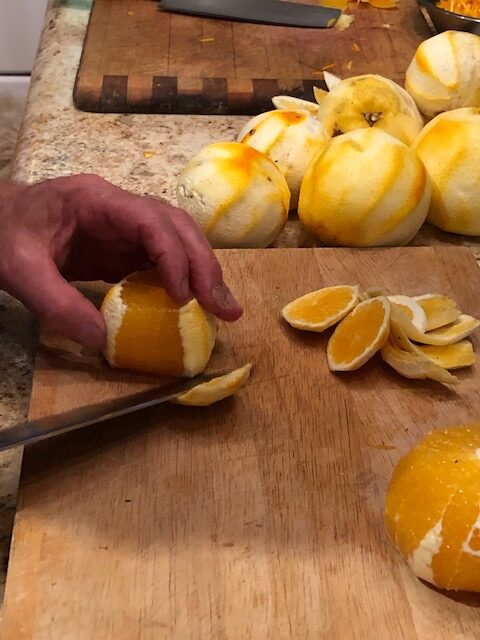 5. Hold a fully peeled orange and use a sharp knife to cut out each segment between the membranes that have the sections together. 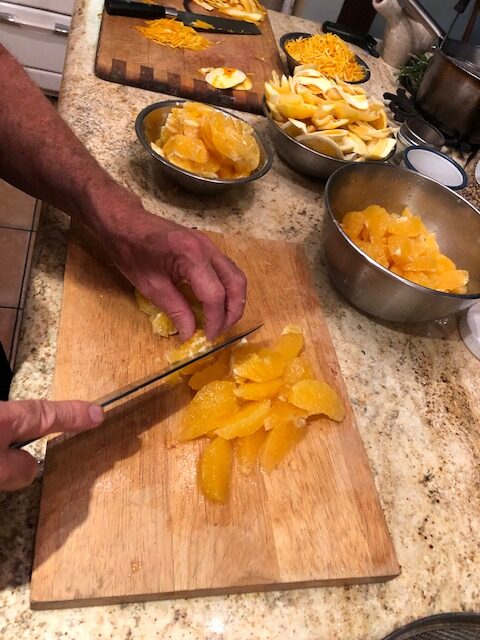 6. Once you’ve cut out all the fruit, squeeze any juice out of the membranes into the bowl of segmented fruit. Set the membrane aside, along with any seeds (the pectin in these will help “set” the marmalade later). 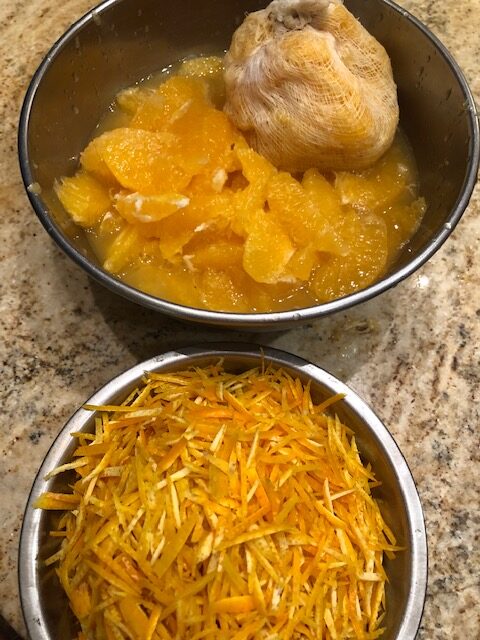 7. Combine the zest, fruit, juice, water, and sugar in a large, heavy stainless pot and bring it to a boil. Stir just until the sugar dissolves, then stop stirring. 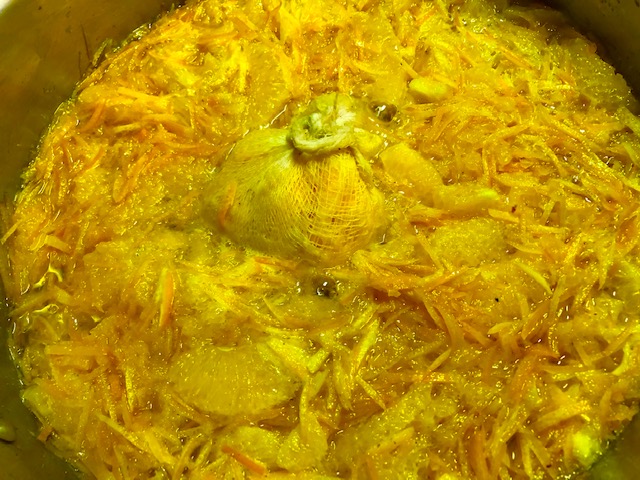 9. Meanwhile, bring the marmalade to 220 F simmering (which took us over 2 hours, so be patient). Then once it reaches 220 F, hold it there for 5 minutes. Do not stir. 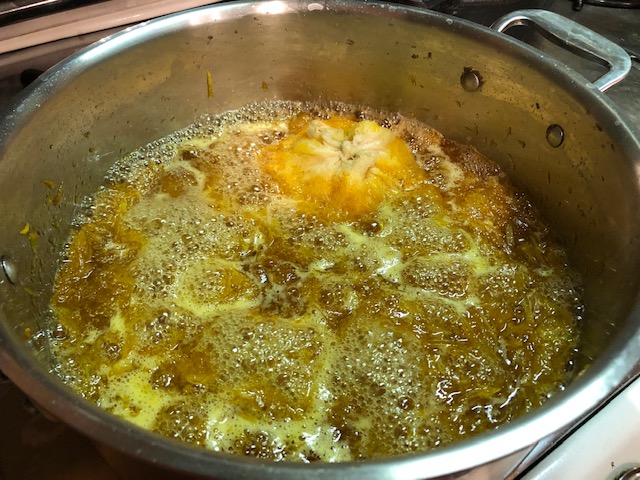 10. Remove the pectin bag, squeezing any marmalade out and back into the pot, and discard the bag. Take the marmalade off the heat and let it sit for 5 minutes. Set up three clean pint jars or several small jars like we did with sealable lids (if canning, they should be hot and sterilized) next to the pot. 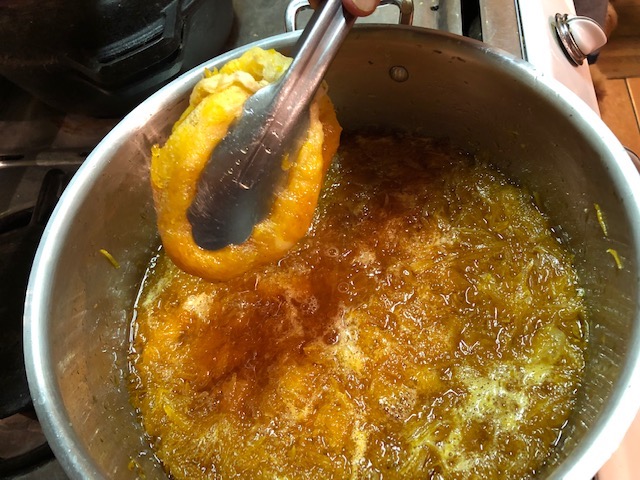 11. Stir the marmalade to distribute the zest evenly in the mixture. Use a ladle or spoon to transfer the marmalade into the jars, leaving 1/2 inch of headspace at the top of each jar.

12. Put the lids on the jars and refrigerate, or you can proceed with canning. 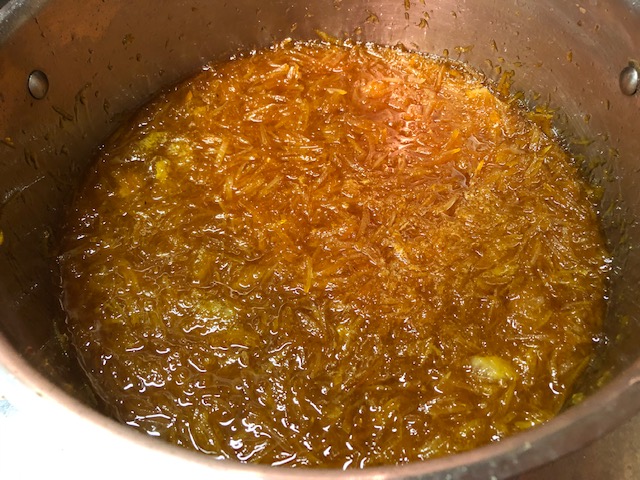 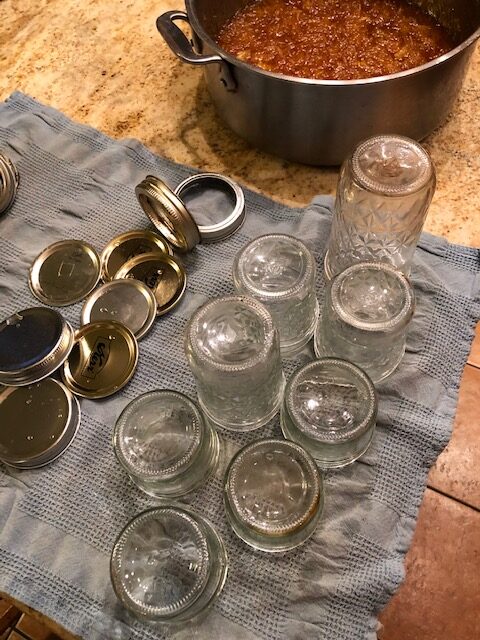 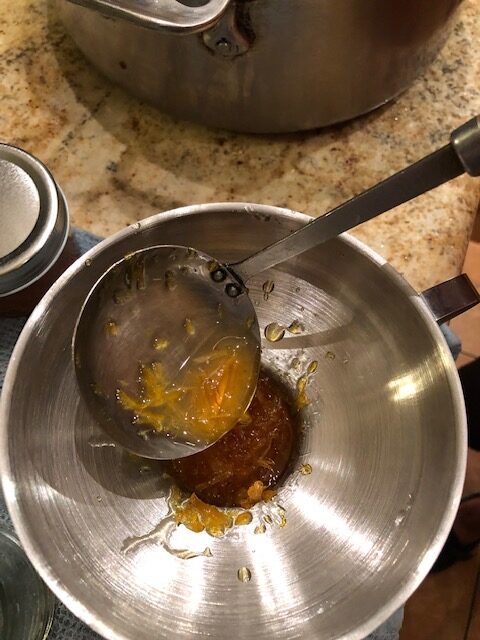 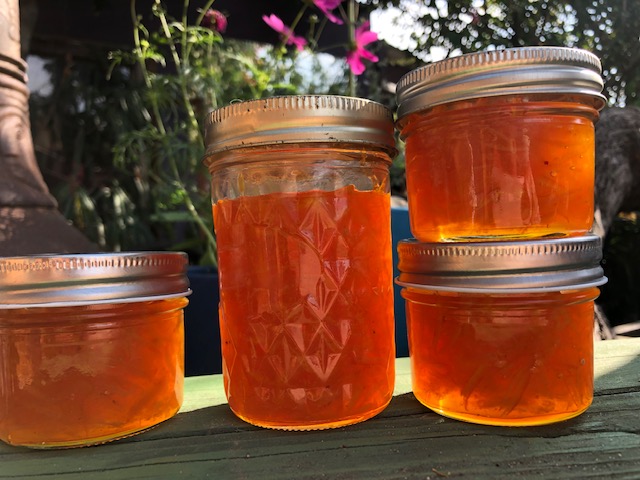 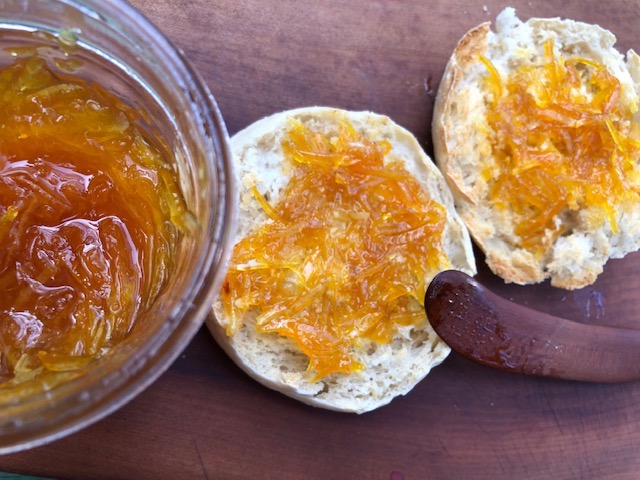