My first Valentine’s Day memory was when I baked cookies the first time, I was sweet 16!
The cookies were for a man I admired, Richard Kermode, who played keyboard for Santana. I had met him when I went to see Santana’s concert. He was also in a band of my favorite American woman rock singer, Janis Joplin and played Woodstock concert (The Woodstock Music & Art Fair) in 1969.
Since my mother did not do any baking, we did not have an oven, so I asked to get a small toaster oven for our house. I had to wait to use the kitchen after we finished cleaning up dinner.
I think I started after 8 pm and finished after midnight.
February in my hometown of Nagoya, Japan, had no snow, but it was cold.

The cookies came out delicious, and I packed them to send to Richard in San Francisco.
I was so exited to go to the post office the next day, but I caught a cold, and a few days later, I got really sick with a fever. My mom thought it was because I’d stayed up so late making cookies. I got a high fever and ended up being in bed for one week.
But I got a phone call from Richard and was able to talk to him because I was sick and did not go to school. He really loved the cookies, so it made my cold go away.
When I was a teenager, I was fat (had a bulimia) and did not have a boyfriend, so this was a beautiful memory of Valentine’s Day.

Since I met Eric, he has been taking me out to Valentine’s Day dinner and giving me gifts. I usually make my own calligrahy card and a gift for him (a part of my Valentine card for Eric this year I put on the top of this blog – A heart wreath with many small hearts by water colors and Italic calligrahy).

This year, I told him I wanted to stay home, so he surprised me with a new ukulele and a card said,
“To my Valentine, Sanae…All my love on this special day and everyday! Love, Eric”.

How sweet Eric is and I really felt how much he loves me even I was diagnosed cancer twice (in 1993 & 2017), and became disabled because of the car accident I had in 2001. I am learning true love with Eric’s love. I am a lucky person to experience his love so I have a mission to get well.

Ukulele sounds were always so soothing and healing to me, ever since I went to Hawaii for the first time when I was 17 years old. Eric and I started practicing ukulele a few years ago and taking classes. Eric plays very well, but I am not so good yet. I just enjoy being with him and doing something together.

Because I was diagnosed lymphoma (Diffuse Large B-Cell Lymphoma -DLBCL Primary non-Hodgkin of Liver)  last year, I could not practice anymore, so we stopped going to class. When the new year came, I felt I had enough strength, so we decided to try going back to class just a couple times a month. But I found that my ukulele had cracked; I had a soft case, so it must have bumped into something. It was still okay for practice, so I have been using it, but I knew I had to get one sooner or later. 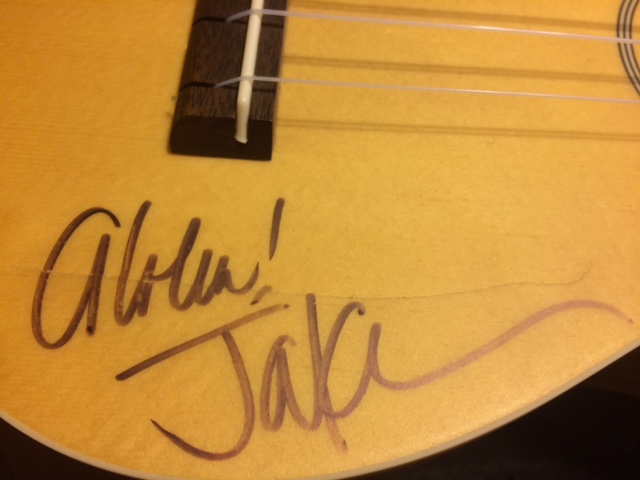 Photo: You can see a crack just around Jake’s autograph.

Eric found a ukulele specialty store, U-Space in Little Tokyo (in Downtown L.A.), so I just wanted to see what they have there. 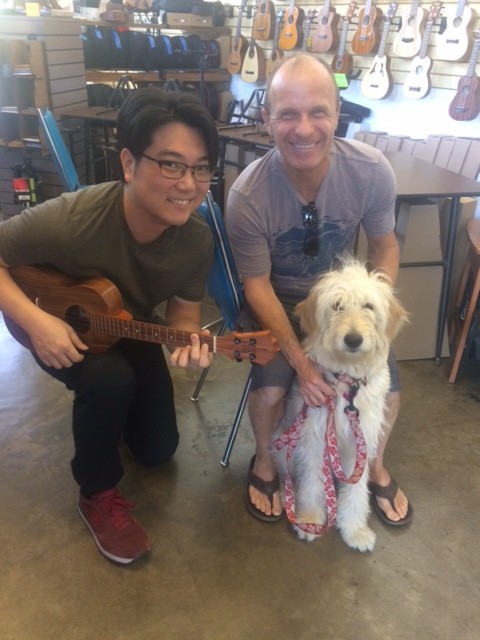 Photo: Eric with our Nalu (she was a little shy) with U-Space’s Jason. 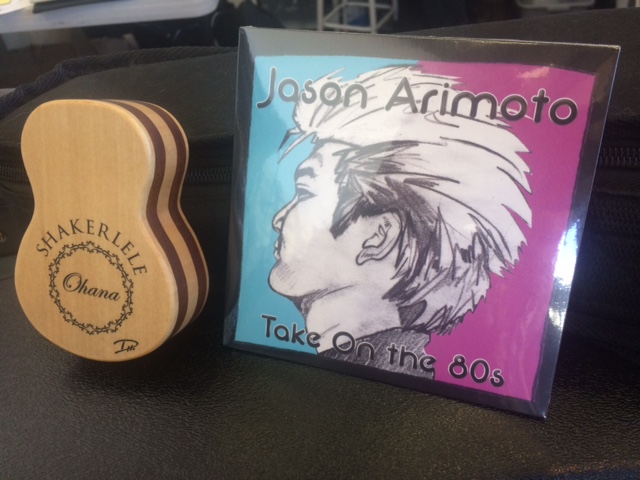 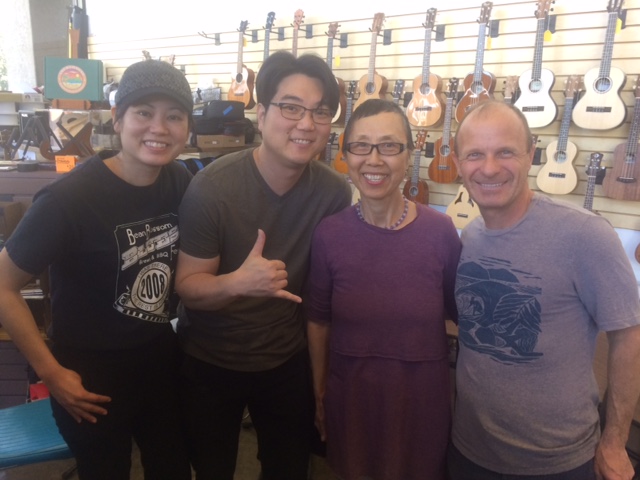 Photo: With Jason and owner of U-Space, Patrice.

We met Jason (who is a ukulele teacher and has a CD) and the shop owner, Patrice; they were so kind and attentive. They has so many beatiful and great sounds ukulele. Of course, I loved some of the ukuleles there, so I thought I would save up money to buy one for my birthday in April. But Eric said, let’s get one with a hard case now for a Valentine’s Day gift.
I was surprised and so happy.
I promised myself I am going to practice everyday, even just 10 minutes, so I can play better with Eric.
I also think ukulele sounds help me to recover from Lymphoma smoothly. 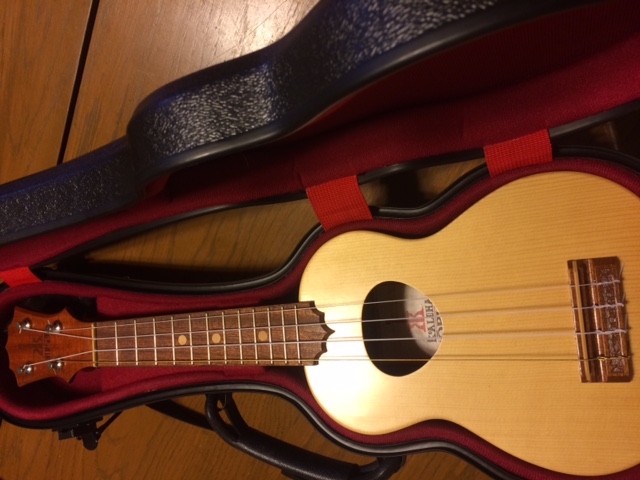 Now our friends Masako and Michiyo have joined our ukulele class, and our friend Kyoko will join soon.
Would you like to join us?
Our teacher is Dan of Dan How Music on 17th Street in Santa Monica. He has no website or Facebook page, so you’ll need to contact him at Dan How <danwayn@gmail.com>. 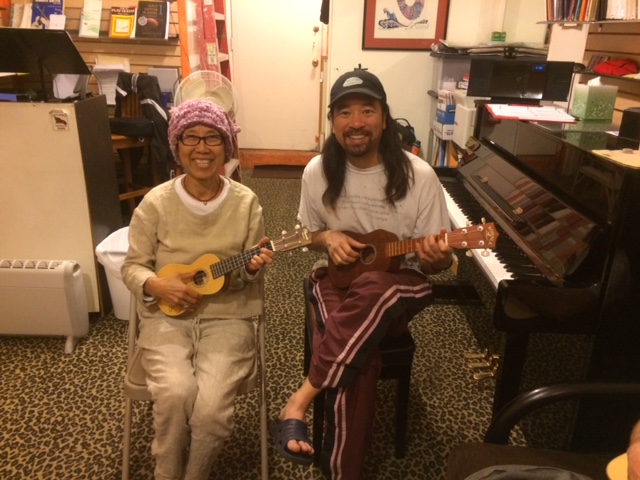 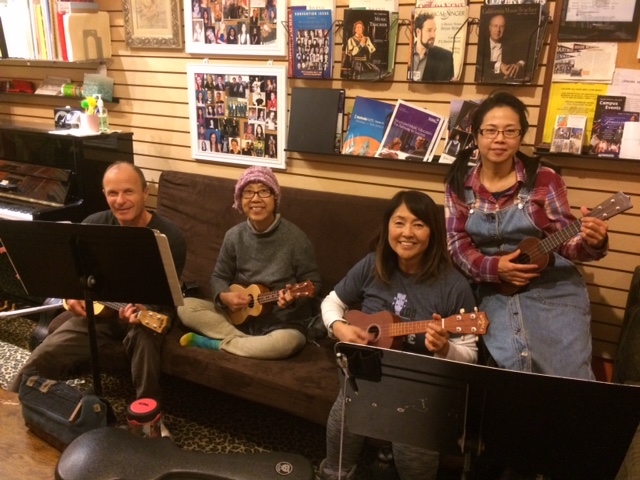 Photo: With Masako (right) and Michiyo (next to Masako).

We would like to have a ukulele recital potluck someday.
Hope you come!