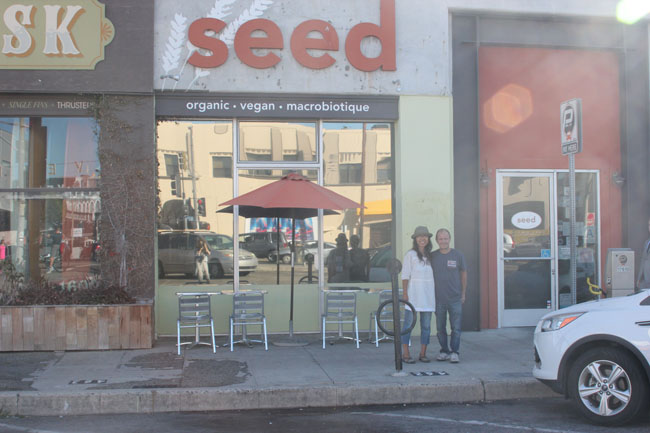 Seed Kitchen restaurant was our life for the last eight years. It was our dream to open our own plant-based, vegan, and macrobiotic restaurant.

It started after I met my husband, Eric Lechasseur, in 1991. He was only 23 when I met him, but he was already an executive chef at one of the big resort hotels in México.

I was going through my separation and divorce from my first husband, and I was exhausted. I was extremely fatigued and got sick with flu symptoms almost all the time in 1992, and I was diagnosed with ovarian cancer the following year. I was told to meet a macrobiotic counselor, Cecile Levin, to get her advice for healing myself. I did my best to follow her directions for cooking healing, plant-based, vegan, macrobiotic foods, remedy drinks, special compresses, shiatsu massage, Do-In exercise and more. I started to feel better within three weeks or so, but it took a year to really know this was working, as shown by blood test results and other proof.

After I completely recovered from ovarian cancer in 1995, I started having many dreams.

I came up with the name “Seed” because I felt what we were doing was planting a seed in helping others and ourselves to be healthy and happy with delicious food. We did not have much money, and we didn’t have any family living in America, since Eric is from Quebec, Canada, and I am from Nagoya, Japan.

We established together our company, Mugen LLC, in 1999 and offered a plant-based, vegan, macrobiotic dinner club and put on special-course dinner events – we call a pop-up restaurant. Making our package foods at a commercial kitchen and deliver them to Co-op market, Erewhon Natural Foods Store and more.

I was faced with another challenge in my life in 2001 when I had a near-fatal car crash that left me with many bone fractures in my legs and caused my heart and lungs to fail. Under such distress, I fell into a coma for three days; after that, I was bedridden for one year, with no mobility for three years. But I kept my practice and faith in macrobiotics, and with time, I healed myself. Now I walk every day and became yoga teacher this year.

Even with all of our struggles, we never lost our dream. We started saving our money and looking for our dream restaurant location in 2005.

It was not a perfect place, but in 2008, we found a location near Venice Beach, where people were coming from all over the world. With just our savings, some help from my brother, and a couple of friends’ financial support, we opened Seed Kitchen.

We were so happy to have so many people come from all over to eat at Seed. We were delighted by many magazines’ coverage of our restaurant, as well as Eric had become a runner-up in a 2010 PETA food contest. We have such appreciation for all the staff who worked for Seed, as well as all the customers who enjoyed our food for so long. 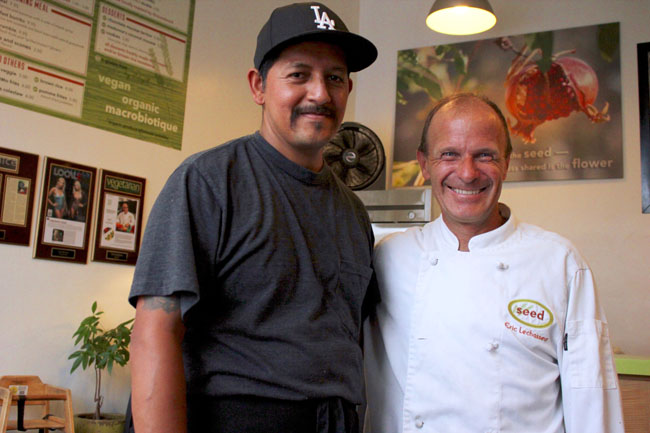 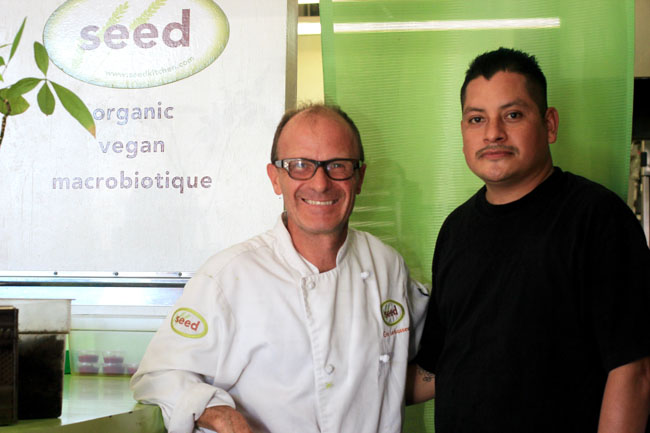 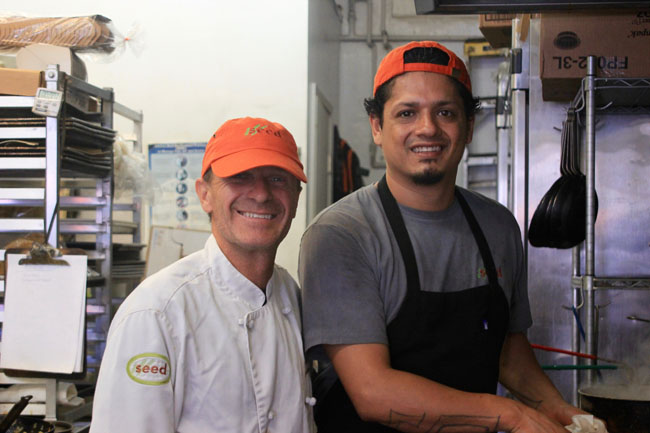 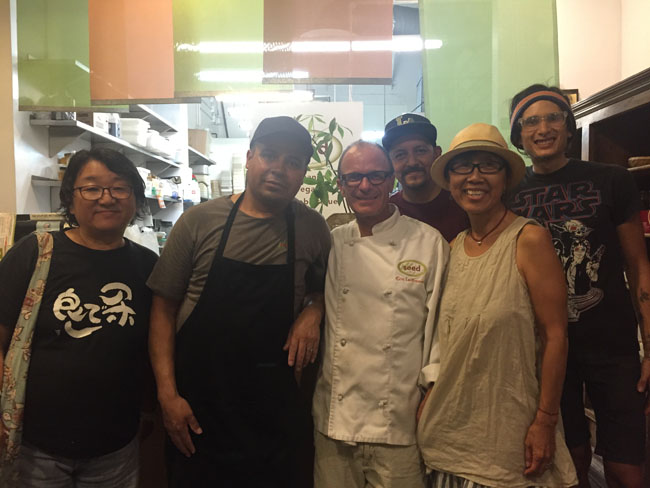 We love Seed Kitchen’s food so much! For eight years, we offered some of the best plant-based, freshly made food every day. Our five different burgers were definitely the most popular: Southwest burger with whole grains and beans, BBQ tempeh burger, seitan sirloin burger, Mediterranean burger, and slow-simmer BBQ seitan burger. Plus, we offered three different kinds tacos, a macrobiotic “Sai Sai” bowl, and three different curry dishes. We made all-fresh, in-house sauces, dressings, salsas and pesto, as well as Eric’s wonderful original seitan and, of course, his amazing desserts.

We were a small restaurant, but we made high-quality original, fresh foods. We also followed the macrobiotic principles that helped me in healing from ovarian cancer and my car crash. This brought us to cut refined sugar from any of the desserts, the BBQ sauce, and everything we make. We use sea vegetables for minerals in our sauces. 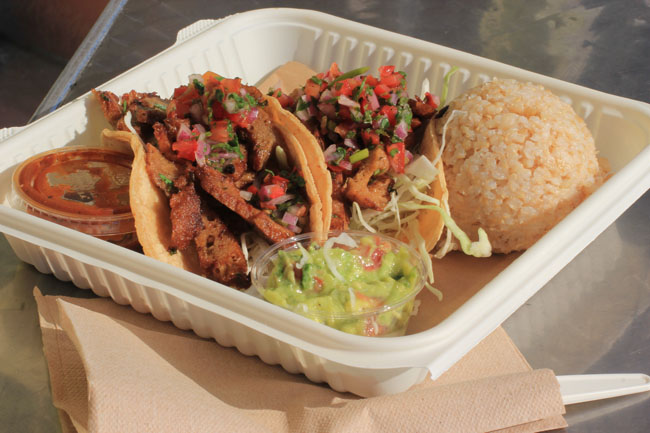 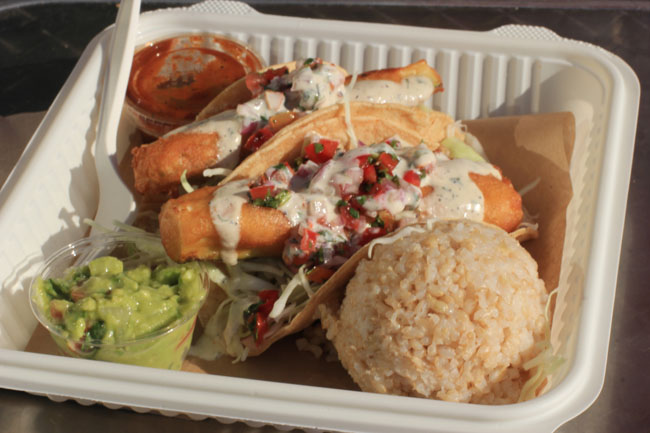 We are very sad to be closing Seed Kitchen. A month before closing I decided to make a short documentary film—with the help of our good friend Claire Johnson—for ourselves, others who loved Seed Kitchen, and people who could not come to taste our food in person. Claire came to start shooting the film seven days before the closing. 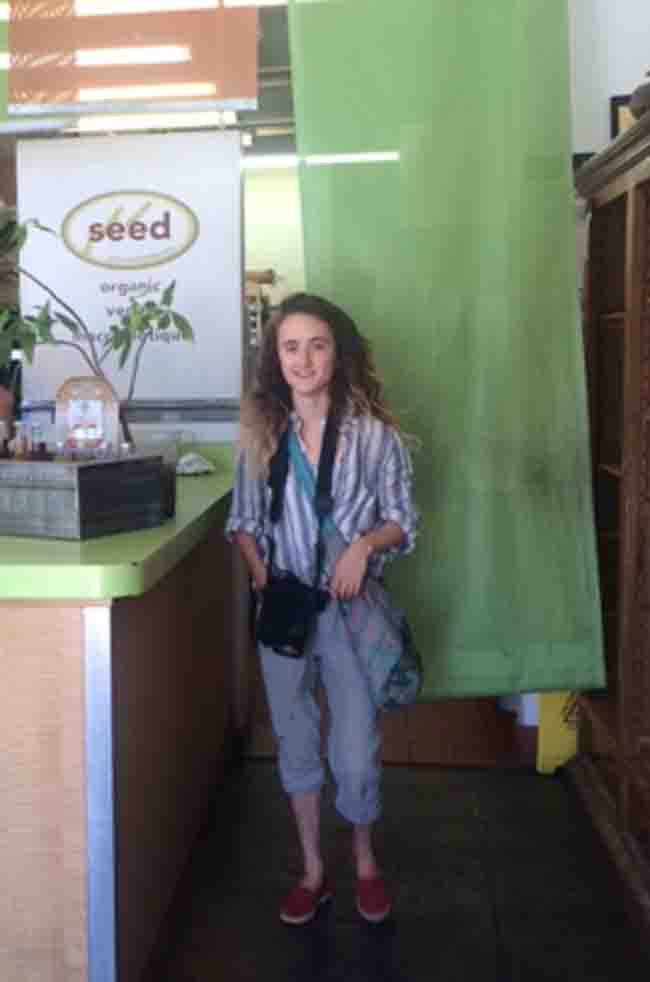 We could not capture everything and everyone, but we received so many emails, Facebook and Instagram messages, and phone calls from people who are going to miss Seed Kitchen. One woman came and was crying, asking where she would go from now on to eat delicious, safe and healthy food. We almost cried, too.

Making this film made us realize how much Seed Kitchen meant to so many people and to ourselves. The eight years’ labor of love, our passion, effort and even stress we had—they are so valuable for our future. We can’t thank you enough for these opportunities. We will miss our Seed Kitchen—and we plan to publish Seed Kitchen’s cookbook next year!

We hope that when this film is completed, it plants a seed of inspiration for your heath and happiness.

Here is the first trailer of Love, Seed Kitchen.